Fishing in the Toilet and Interrogations.

Yesterday I witnessed a one hour interrogation of laboring and post partum women.  The nurse wanted to know which of them had tried to flush a pad down the toilet.  It ended in a very weak mother, who had delivered only an hour earlier, being forced to fish the pad out of the toilet.
(These women have rarely seen flush toilets or used disposable pads...so it is a hard thing to get used too)

I see things in the hospital here that are very hard to see.  Interesting though, the women are NOT complaining.  They are thankful.  At the end of an awful delivery (one that would surely bring a lawsuit in the USA) she is saying..."I'm so glad I was here!  Who knows what would have happened if I had been in my hut alone."   She isn't saying this because she has been brainwashed by the medical community.  She has seen firsthand friends and relatives who died in childbirth.

It costs them one month's wages to spend the night on the floor in the hospital filled with rats and cockroaches.  They stand barefoot in a shower (if there is water) where 30 other ladies stood and bled...in a country where HIV is rampant.

The hospital situation here can be gross and sometimes even abusive.  Oh, and did I mention that you have to bring your own toilet paper?  There is often no running water for days at a time...I would like to see it changed.  I  am glad though that less women and babies are dying here in the hospital than they are in the jungles....although last weekend 3 newborns died in the hospital in a 24 hour period....so I wonder about that too sometimes.

The funny thing is that I believe the hospital staff is really trying hard to do a good job. (Except for the Nurse Interrogator)

I personally have some horrible stories about American hospitals....but I never had a nurse make me fish things out of a community toilet. 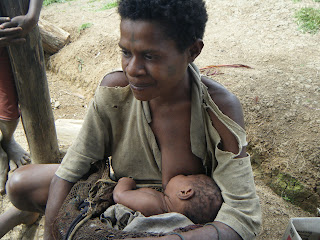