Lost in the Jungle


Have you ever wondered what you would do if you were really lost in the wilderness?

One night, about two years ago, I discovered what I would do…. 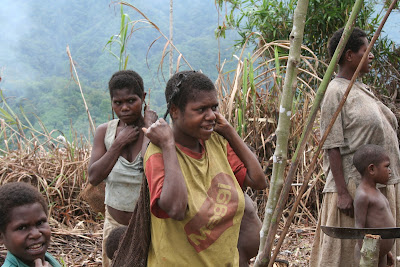 "Hka hka hka" I could hear the familiar cough in place of a knock outside my door. I went outside to investigate.

There was a middle aged woman with one blind eye, two teenage girls, and two young men at my door. I hadn't seen any of them before. They had come to get my friend and I.  A woman with twelve previous children had given birth to twin girls the night before. Both babies were fine, but the woman was bleeding a lot, had a retained placenta, and they feared for her life. They wanted us to come and help.

It was a four hour hike to where she was in her banana leaf garden shelter. I got what I might need and we all started out. It was 4pm and our husbands weren't going to expect us back until the following day.

It is a treacherous hike. It seemed to be either straight up or straight down most of the time. Now it is the custom here, to yodel messages back and forth between the mountains.  About 2 hours into our hike we heard yodeling from the mountains across from us. The woman had died.

We told them to go on ahead, as it was their mother and sister who had died. I had a nine month old baby and wanted to get back.

Our guides would have led us back…but we figured we could find our way back through the jungle. (Don’t ask me why two California girls thought that) So after about a half hour on our own, we could not find the trail. We went up…all we could find was thick bush.  We went down and it was the same. So here’s what we did.

4. Shine our flashlights to the mountain villages across the valley.

What did we yell? Well, we perfected our yodel (The way they yell from village to village). We yelled “the white ladies are stuck in the bush!” in 5 different languages. (Spanish and French were just to mix it up for our sakes) We figured as long as we were making noise, it could attract help.

We yelled once or twice that we didn’t have any toilet paper so someone really needed to help us.

Eventually (a couple of hours later) two young men from the next mountain range over (yes we had been that obnoxious) came to get us and lead us home.

So we were home before 1am and slept safely in our own beds.

If this woman had a skilled birth attendant with her, she would still be alive today. One of the twins died a week later.